PHILADELPHIA, Jan. 16, 2020 /PRNewswire/ — Urban Axes, the country’s leading indoor axe throwing organization, today announced that it had a record-breaking year, achieving a series of milestones, all while...
by vstartye January 16, 2020

PHILADELPHIA, Jan. 16, 2020 /PRNewswire/ — Urban Axes, the country’s leading indoor axe throwing organization, today announced that it had a record-breaking year, achieving a series of milestones, all while leading the charge in introducing the nation to its newest favorite pastime – axe throwing. 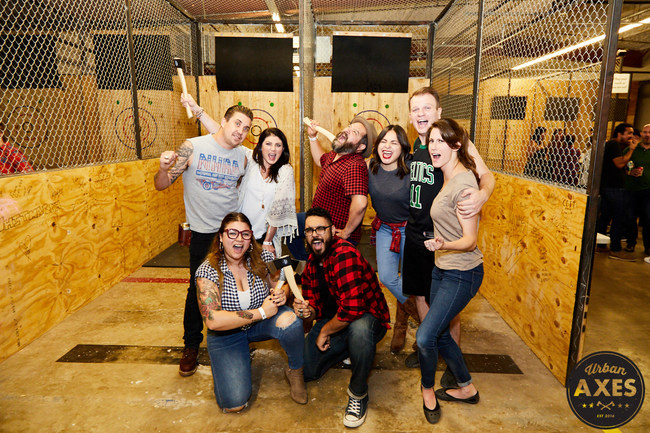 In 2019, Urban Axes opened three new locations – Cincinnati, Ohio; Phoenix, Arizona; and Houston, Texas – employing over 200 people across its eight locations and giving more than $40,000 to local charities through their fundraising efforts. More than 250,000 people threw axes at Urban Axes last year, and the organization expects that number to only increase in the coming year as they look to continue their nationwide expansion.

“We’re really excited to introduce even more people to the sport of axe throwing this year,” said Krista Paton, co-founder of Urban Axes. “We have Raleigh, North Carolina, coming up next, along with a second location in downtown Houston (EADO). But we’re definitely not stopping there! As the first to bring axe throwing to the U.S., we’re known for offering the best axe throwing experience out there, and that’s something that we’re looking forward to continuing as we grow.”

According to a recent study, axe throwing was among one of the top activities that consumers spent their money on in 2019, and with nearly half a million people that have now thrown axes with Urban Axes since its inception in 2016, it’s clear that interest in the sport isn’t slowing down any time soon.

“We grew over 200% this year, which is crazy. It’s really a testament to our love of the sport as well as the sport itself,” said Paton. “It’s been so incredible over the last couple of years to see the excitement surrounding axe throwing grow within our organization.”

Urban Axes’ flagship location opened in 2016 in Philadelphia, Pennsylvania, followed a year later by its second location in Austin, Texas. In 2018, the company went full-speed ahead, opening up three additional facilities – Baltimore, Maryland; Boston, Massachusetts; and Durham, North Carolina. The organization is on track to continue expanding its national footprint in the coming year and has plans to hire another 100+ employees to help run its operations at its newest facilities.

For more information on Urban Axes, its plans for the future or to book an event, visit urbanaxes.com.

Global transdermal drug delivery system market is expected to grow with a CAGR of 4.3% over the forecast period from 2019-2025